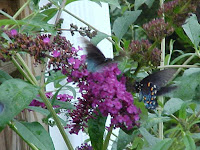 Jeremiah 29:11 For I know the plans I have for you," declares the Lord, " plans to prosper you and not to harm you, plans to give you hope and a future."
When I return from wade fishing, I rinse off waders and boots. After a few hours, they are dry enough to bring in for storage. However, I leave my dip net on the porch propped against the wall for a couple of days until the wind and heat assure it won't mold. When I picked up my net to return it to its hook yesterday, I noticed gooey yellow slime on the slider unit. After wiping it off with a paper towel, I discovered a hitchhiker in the form of a caterpillar who had obviously deposited the goo. I carefully balanced him on the net handle and took him outside to leave him on the porch rail in a safe place. This time I made it a few more steps when I saw the result of part of a butterfly's life cycle: a brown lumpy chrysalis imprinted with an undecipherable shape almost like the hardened body of a caterpillar. Who would have guessed that in all the normal habitats around our back porch for such an event to happen, the worm would have chosen the dip net? There are all kinds of nooks, posts and ledges on the porch as well as plants, trees and brush only a few feet away. But the worst part of all, was that I had inadvertently interrupted his mission: to complete the pupate stage in which he will form the chrysalis around his own body thus imprisoning himself until he “dies” to resurrect again as a fully formed butterfly in the future. What I had done by my “good deed” of releasing him outdoors was to force him to begin the process all over again. I reflected on how often we mortals interrupt God's plan for our lives with our petty concerns and agendas. I can only speculate how much we must try his patience when he has to start over again re-molding and shaping us into the Christians he wants us to be.
Yet, I see the results of his efforts as I gaze out my office window. I feel as though I'm immersed in my own butterfly kingdom. With the onslaught of summer sun, our butterfly bushes are now as tall as the lower edge of our windows. Like the hypnotic trance one encounters when staring at a fish aquarium, I'm mesmerized by this view of a variety of Ozark butterflies to delight the eyes. Smaller varieties, like the Zebras with their turquoise colors banded by black stripes, frolic and drink from blooms next to my little corner of the universe. They're often accompanied by hummingbirds who flee from our sugar water feeders to seek a more natural taste. When these creatures leave, the larger swallowtails arrive at the table including the Tiger, Spicebush and the Giant Black Swallowtail. They drift and cavort in the glimmering buds until I'm almost lulled to sleep, so peaceful is their rise and fall ... like a baby's sigh during nap time. And once again, I'm reminded of the simpler pleasures in life and the glory of God's love and patience ... where time waits for the rustle of butterfly wings and sunshine brings them back to me at dawn.
Posted by WriterGal at 12:37 PM