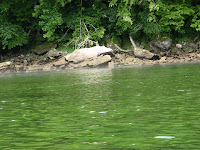 And his fulness have we all received, and grace for grace.
John 1:16
Anxious to re-visit the new narrows access on the White River during low water, I pulled on waders, boots and vest; then set out across the gravel bar to the main channel. A kind flyfisher shouted, “There’s a Caddis hatch on.” I thanked him and wondered if the Orange Partridge fly I’d attached would work.
I slogged my way upriver from him to one of the rock piles from which I’d pulled some good fish last fall. After wading in, I sipped the glories of a late Spring day: trees now green and fresh, an imposing bluff guarding the river, and sky so blue it dazzled. No fish grabbed my fly in this pool; so I moved up to the next spot.
Here I tied on a Green Butt, a successful fly on the Norfork River the week before. No takers on this one either. Golden teardrops of Caddis continued to fall. The trout feasted, smacked, jumped, and guzzled. All around me, they cavorted and consumed copious quantities of the small moths, but still refused my fly. I resisted letting them ruin my day, but I admitted to growing irritation.
Finally in desperation, I tied on a tiny Zebra Midge. We had ordered a different variety, this one having black fluff near the top of the hook. I walked up to yet another part of the river where I cast downstream and let the fly drift out of the current into a calm place only a few feet from the bank. Suddenly a giant fish hurled its body out of the water in front of me. Just as suddenly, I realized the trout was attached to my line; and came to my senses soon enough to keep the slack out and watch enthralled as she flung herself once more into the air.
“Please don’t let me lose this one,” I muttered. She headed for her comfort zone, deeper swifter water; and I exhorted myself to be patient and careful to keep tension on the line, not reel too fast and wait until she tired.
I tried to steer her toward me and at the same time to back up into shallow water. This was hampered by my wading staff, now loose from the pile of gravel where I’d stuck it. I couldn’t step over it and lose my balance and I certainly couldn’t lose focus on the fish. I stumbled once in the loose rock and attempted to slow my pounding heart.
At one point, she stopped just long enough for me to see how large she actually was and I knew this was no mere stocker. Once more she plunged out into deeper water. I remembered a trout show, On the Rise, where the guide lectured the stubborn client to let go of the reel handle. So I patiently let the drag do its work. The reel sang a lively tune a couple more times, until Ms. Brown began to tire. I methodically cranked in a steady rhythm and then wondered how I’d get her into the net.
Remembering another lesson learned from my friend and casting coach, Lori Sloas, I steered the fish up into shallow water, until I could scoop her into the net. Not wanting to create a scene … fly fishers are notoriously humble on the river … I only gave a minor squeal as I tromped up the bank to quickly measure her with the only thing at my disposal, my rod. Mentally marking that she came to the first notch after the butt, I clumsily attempted a picture with my cell phone camera to no avail. I longed for a way to measure her girth, but there was nothing. Worried at the amount of time she’d been out of the water, I released her and waited till I was assured she swam away before I breathed a sigh of relief.
Not only had I conquered my lack of finesse with midges, but I had managed to land the largest German Brown trout I’d ever caught.
I marveled at the number of flies I’d tried and my disillusionment and frustration. Isn’t this often how God works in our lives? We search for ways to prove our worthiness to him by changing our approaches to his goodness, hoping to land that whopping amount of grace by all our efforts. And then, when we least expect it, along comes a giant measure of it, a backward blessing … unexpected, not requested, simply given like salvation, complete and blessedly free.
Posted by WriterGal at 6:39 PM 3 comments: