Cast your cares on the Lord and he will sustain you. He will never let the righteous fall. Psalms 55:22 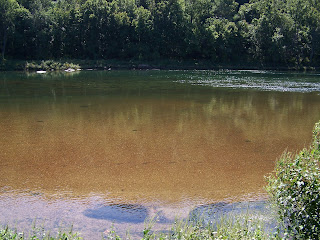 Like an old friend who waits for my return, my riffle is back and ready to fish. Last year during the floods, the river's landscape dramatically changed. My favorite rockpile and stream site sustained punishment from the pounding waters. I feared I might never fish my spot again. Yesterday with another low water day, I resolved to wade across the swift water and determine if it was again fishable. Even though the white rock which had been my marker was covered up, I found the rock collection in much deeper water, but wadable. I pulled my cinch knot tight on my White River Angel fly and threw across the swiftly moving water and allowed it to drift down stream. Within the first two casts, I landed a glistening Rainbow. The next several casts rewarded my net with five more fish. Each one was carefully released to await my next trip. Wishing to get closer to the far shoreline where I'd hooked and lost a nice Brown two years ago, I waded into deeper swifter water. I planted my wading boots hard into the gravel bed, but the current still rocked me with a constant pressure. After several casts along the edge of the mud and with no more fish, I began to feel uneasy at the continuous push of the water and realized I was close to losing my balance. Two giant Blue Herons fussed at me with raucous language. Deciding to heed their advice, I reeled in my fly, attached it to my rod and ever so cautiously turned around to seek a shallower spot. I stumbled over a large unseen rock, but regained my footing thanks to my wading staff and a small prayer. Finally I reached a more comfortable position but with no takes. I walked up the gravel bar and fished the end of it where there is heavier water and a deep cut; but netted no fish. By this time, the sun slid over the horizon and I decided to return to the riffle. I threw in a slightly different direction and again, waited for the fly to drift downstream. Two more fish plunged at the end of my line before I left. I'd accomplished what few rookies do: caught and released over my limit in an afternoon of fishing. I will rejoin my old pal riffle on another low water day. The rockpile and the fish will be waiting.
Posted by WriterGal at 6:15 PM 1 comment:

After over 10 days of high flows, Bull Shoals Dam stopped generation last night at midnight. I made numerous trips down to the campground to check the water level, seeking that magical drop in flow so I could wade-fish. By the time the water was right, humidity draped the shoreline like a heavy woolen blanket; so I planned on late afternoon fishing. Finally at 4:45, I strapped on all my gear and headed to my favorite spot downriver on our 4-wheeler. Like a small child turned loose in the candy store, I could barely contain my thumping heart. It has been almost a month since circumstances allowed me to wade.
Fitting my Albright 4 wt. rod together and attaching my Galvin reel, I was soon ready after threading on my favorite fly: Mike's White River Angel. Within 5 minutes, I landed a small Rainbow. After light takes which never produced another fish, I changed flies several more times with no results. The afternoon humidity continued to wear on me and I decided it would be healthier to seek some shadier spots. I walked several hundred yards upriver near a neighbor's boat ramp and tied on a tan Scud with no takes. There was a hatch on. The twirling cavorting insects looked like a Parachute Adams, often touted by my friend George Peters. Now, I've never been successful with dry flies. I can never seem to get the drift just right. But I kept repeating to myself what the experts always tell us: “Match the hatch.” I tied on a Parachute Adams, squirted it with dry fly “dressing” to keep it from sinking and began to cast. I decided to allot myself 5 attempts before I switched to something else. On the 4th cast, I allowed the fly to drift way below me and gave it a couple of twitches and then began to strip it in. When I stopped, my attention was momentarily diverted by Canadian Geese and their new brood of goslings as they paddled beside the far shoreline; but I quickly focused when my fly was attacked by a healthy Rainbow. He skipped across the water determined to shake loose the hook; but I kept the pressure on the line and steered him carefully into shallower water where I scooped him into my net, admired him for a few seconds and gently released him. I had successfully captured my first trout on a dry fly. George would be proud!
Blessings,
Writer Gal
Posted by WriterGal at 6:11 PM No comments: