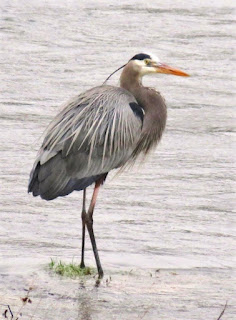 Photo by Diane Mikrut
Romans 5: 3-5...but we glory in tribulations also knowing that tribulation worketh patience; and patience experience; and experience hope: And hope maketh not ashamed because the love of God is shed abroad in our hearts by the Holy Ghost which is given to us.

On a stellar Monday afternoon in June, I drove to Wildcat Access and parked my SUV in the last available slot. As I opened my hatch and grabbed waders and boots, I vaguely referenced a large burly man sitting at a picnic table removing his gear. I sat down at the other table and began to pull mine on. As he walked by, he said with a snarl, “You’re wasting yer time. I’ve tried every fly in my box and haven’t caught a thang. My wife’s down there fishing too and she’s hasn’t caught anything either.”

Somewhat taken aback by his tone, I replied kindly, “Yes, I saw you taking off your waders.” I’ll just show you, I thought. But try as I might, I couldn’t catch a “thang” either. I waded up and down the shoreline, tried multiple flies and met with no success. As the evening turned into dusk, however, the smell of bacon wafted across the river from a nearby resort. Visions of BLTs on fat Texas toast created a mouth-watering picture. I marveled at a heron that appeared, from a distance, taller than I am … his signature long-legged strut always a strange sight. Just as the sun slid down the horizon, six squawking Canadian geese flew over my head … so close I felt like I could reach them with my rod tip. And even though my gratitude didn’t encompass any trout takes, nevertheless, I was blessed by this day away from worries about the Pandemic. By that point I felt a pang of regret for my negative thoughts about the man who failed to see such wonder and magic in this setting. Maybe he just needed a little bit of Jesus! And why hadn’t I provided that witness?

The next day I returned and caught a small brown but nothing else. His size belied his strong fight and I was happy with his efforts. My trip was cut short, however, by a snarled tippet that made an eagle’s nest look tidy. Deciding to quit, I still enjoyed the time I had along the riverbank. On the way back to the car, I was in the process of returning a phone call, when 2 men approached looking woebegone. Cancelling my call, I asked, “Can I help you?”

One said, “You look like someone in the know,” to which I giggled. “We’re here from Michigan staying at a resort up the road and need to know how to fish this place.”
I began by telling them about the various entry points and what flies to try. Then I said, “We used to own a resort and this is what we told our customers: we don’t want to get in your pocket; but you might want to try a …”

One of the men interrupted, “We know … a guide. But we’ve checked with the local fly shop plus our resort people and all theirs are booked.” The two gents shook their heads in disgust. “I knew we should have called a week ago and made arrangements.”
I felt sorry for them and replied, “Let me give you the number of one of our guides.”  Then I suggested some easily remembered guide websites; and told them to use my name when they called.

“Will he take us to catch big fish?” One of the men asked.

“You need to tell him when you call,” I responded. “But it will depend on water levels, weather and a lot of things for him to do that.”

Much happier, they left to go to their car to make the contacts. Maybe I’m just a sucker for people who need help; but we’ve all “been there” anxious to try out a new place without the proper info.

As I returned to my car, I decided that maybe it was no accident that I had to make an early departure. I’d done a good deed for some folks who needed some advice; and maybe after receiving that small act of kindness, they will decide to return to our little slice of heaven.

That night I reviewed the prediction for Wednesday’s generation and was jazzed by the thoughts of minimum flow. Promising myself an early start, I packed my car and set my alarm extra early.

Wednesday I quickly drove to the access and discovered, to my delight, the prediction was true. I could hardly wait to hit the water. As I sat down to slip on waders, two teenage boys walked by and I said a hearty good morning. They responded with a polite greeting. They carried 2 kayaks, set them down along the shoreline and returned to their pickup for life jackets. One stopped to talk as I strung my rod. “I envy you what you’re doing,” he said.

“Well you’re going fly fishing and I can’t fly fish from a kayak. I’m gonna have to fish with regular lures today.”

I laughed and retorted, “I can’t fish out of a kayak either. I have to use it as transportation to get to a gravel bar or a spot I can get out and wade.” We both commiserated about our shortcomings for a moment.

Then he said, “But I caught a 26” brown last night at Cotter Access on a black woolly!”

I put my hand over my heart and said, “Oh man I’m so jealous.” He continued to tell me details and how long it fought; then turned to follow his buddy down to their kayaks.

As they reached their boats, I yelled in my best hillbilly accent, “I ain’t yore Momma, but wear those life jackets instead of sittin’ on ‘em.”  They laughed; but as they paddled away, I was pleased to see the vests attached.

By this time, I was ready to go--somewhat buoyed by an enjoyable conversation with two fine young men. I began to fish, vowing to try some different flies and achieve more success than my other 2 days. I tried soft hackles and various other creations with no results. Then I remembered the young fisher’s suggestion. I tied on a black woolly with sparkle in the body and flash in the tail. I found a place where a large dark rock was visible in deeper water and two flat white rocks were embedded in the gravel. As soon as my fly drifted by the rock and into shallow water, a ferocious take rewarded me and I soon had a hefty thick rainbow in my net. The funny thing was, I’d done one of my “normal” operations and tied on an extra-long tippet. I would almost get the fish in and then he’d dart away with too much line to scoop him into my net. Finally I maneuvered him into lower water and made a dip and had him captured. I briefly admired and released him. Within a couple of more casts, I’d garnered his older brother, another stout fellow, with a passion for strong tugs and a brave heart.

By now, I was excited and stood in that same spot catching 5 more, some of the small stocker variety. In my zest, I missed another 7. Finally my aching back reminded me it was time to leave. So I took off for my car, thinking what a fine time I’d had and that I’d managed to last about an hour longer than I usually did.

My husband pulled up in his truck to check on me. “I was getting worried,” he said.

“I caught 7 fish and missed that many more, I said catching my breath. I’d have stayed longer but my back was hollering.”

“Just as long as you’re okay,” he said and drove away.

On the short drive home, I pondered my 3 days on the river. Even though I was unsuccessful the first 2 days, I’d fellowshipped, helped others and given what I hoped was good advice. I was out of the house away from TV’s frightening statistics about the Pandemic. I’d enjoyed sparkling water, glorious sunshine and perfect weather. In addition, I’d had a good dose of some “Joy that comes in the morning.”  I reflected about the man from the first day and that he might benefit from the scripture Ecclesiastes 3: 1 that says “To every thing there is a season and a time to every purpose under the heaven.”  Like many of us, he thought it was all about catching fish. Instead the sights and sounds of the river are a gift God’s given us to uplift our spirits and bring us hope. And cherishing those blessings is never a waste of time.