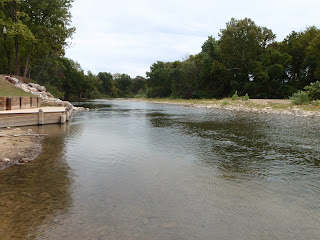 John 15:11 These things have I spoken unto you, that my joy might remain in you, and that your joy might be full.

With late spring flooding sending generation quantities through the roof on both Norfork and White Rivers, wadable water seemed impossible until November. Determined to find an alternative location to fish, I’d driven twice to the new Mark Oliver access on Crooked Creek to check water levels.  At last, an opportunity. The pristine setting has all the amenities other accesses lack: concrete boat launch, sturdy wooden wheelchair ramp, concrete pier, two picnics tables under large shade trees and most important for us ladies, a brand new porta pot. On a late August morning, I found it low enough to wade.


I’d heard about Woolly Buggers versus the often touted Clouser minnows. I began with a strawberry blonde woolly and within a couple of casts, felt a mini tug resulting in a tiny smallmouth of about 4”.  On the other trips I’d made here, I’d observed a quick green streak out from the cement wall and had wondered if it were a baby smallie. Sure enough, the evidence wiggled on the end of my line. Delighted to be on the water after a long hiatus, I smiled at such a small success.


A man stopped with a pickup and canoe attached and was confused on whether he was at the right location to meet his shuttle. I tried to help but didn’t realize he’d said Georges Creek; and he left disgusted with his failure.


In a few minutes he returned, realizing after a phone call that he was indeed in the right place to launch his canoe for Kelly’s access. He and the outfitter who would shuttle were now in sync and even with his late start, he was enthused about his trip.


He removed his canoe and after several trips to his truck to remove his gear, he rigged his rod and made ready to shove off. Before he left, he shared he was from Missouri, had fished for smallies there and recommended flies like crawfish or poppers. “I have some of those,” I said, "and will try your recommendation later.” Then I told him I’d heard it was farther to Kelly’s Access than the supposed 2 miles listed on the signage.


By this time, he was ready to start his journey. Smiled, shrugged and said, “I don’t care.”


I chortled, “Well at least you won’t have trouble finding this access next time.” He joined my laughter and off he went.


Once again, with the meandering water all to myself, I carefully moved across and downstream, picking my way along the rocky bottom. The monotonous mantra of the cicadas almost made me drowsy but bird songs I’d never heard at my feeders added a wakeup call. I tried a brown woolly and was rewarded with another miniature smallmouth plus a sunfish about the size of my hand—its colors as vibrant as Joseph’s coat.


Once again, as I often do on these trips, I marveled at the gifts God has given me: the soul-satisfying tranquility found on this stream; songs to lift my heart and the satisfaction of catching fish. After all, I thought, Jesus built many of his messages around fishing, water, and the sights and sounds of nature’s glory.


Finally I chose a large Clouser, black with red resembling a leech I’d seen on some of the “up north” TV fly fishing shows. No takes graced my rod. Also tried a gray crawfish then a green Clouser with no luck.


By this time I eyed my little cooler left on shore, regretting my decision to forgo the small canteen I usually clip to my vest. Sweat trickled down my back and I decided it was time to wade back across. The obvious quickest route seemed too swift; and remembering my fall at the Narrows, I walked a bit upstream till I found a smoother spot and crossed safely. As I exited the water, I saw a tiny taupe colored frog who blended into the sand quite well until he leapt up the rocky rip-rap. He jumped with not a care in the world.


Spicebush butterflies drank the boat ramp moisture and I stopped to take a quick pic. Two fly fishers arrived and I trudged up the hill where I shared my modest story; then launched into a litany of my unsuccessful flies: Clousers, crawfish, etc. One looked at the other and said, “Well I guess we wasted our money at the fly shop.”


The same fellow asked if I’d tried the big riffle yet and I said no as this was my first trip. “Think I’ll walk upcreek to it. I did well there last time,” he said.


Good info, I thought, as I slugged down half a water bottle; then began to put away my gear. Double checking to make sure I hadn’t left anything, I drove away thinking what a perfect morning it had been: catching fish in a new location where  I had low expectations, receiving fly tips from the canoe guy and a better wading spot idea from the two men.


Pondering the ideas and advice I’d received, I recalled a sermon from a former pastor who now preaches at heaven’s gates. He said, “Little is much when God is in it.”


Finally I understood God’s message via the miniscule frog: happiness grows from the petite events in our lives like tiny catches, dazzling butterflies and the chance to fish another day.


Posted by WriterGal at 2:17 PM No comments: