But we have this treasure in earthen vessels, that the excellency of the power may be of God, and not us. We are troubled on every side, yet not distressed; we are perplexed, but not in desperation.

A fine September day found me immersed in river water to my knees, anxious to fish after the inconsistent generation patterns of the summer months. Perfect weather, floating leaves and a sense of peace flooded my brain as I made my first cast with a Partridge and Orange. With no success, I changed to a Little Randy and felt a small bump but missed it. I flung it back into the spot and waited a bit longer before setting the hook. The fish jumped and I could tell it was small. However, after waiting months to fish, even a dink sounded good to me. As I reeled it in, a rasping noise assaulted my ears. Eager to capture the fish, I should have looked at my rod butt. But in a few short seconds, it was too late as my reel unseated and flopped into the water. Could my rookie days have come back to haunt me? I made a grab for the reel trying at the same time to keep tension on the part of the line that held the fish. My problems only multiplied as the reel sank further and I finally managed to grab it after submerging my arm to the elbow. I couldn’t believe it but could still feel a flopping fish on the now restored line. When I finally managed to get it in, I found a small sucker on the other end. No wonder I didn’t lose this ugly creature. Those thick lips were there to stay.


Much chagrined at this point, I removed the Little Randy and switched to a purple wooly. No success there either, so my new choice was a White River special. An over-zealous guide sped by almost swamping me with his wake. The next people were more courteous. The two fly fishers recommended an olive wooly. I observed their success as they caught fish after fish and I quickly tied one on. Within a few minutes I hooked a stout Rainbow with a robust fight equal to my racing heart. Its vibrant colors graced my day with a beauty to fill any canvas and the 16” length gave me a sense of purpose. The friendly fly fishers were spot-on and another take brought a tussle similar to the first. About the same size and color, he challenged my skills and soon flopped in my net for a quick look and release. The third fish was much smaller but no less appreciated. Since my success rate had been poor during the summer, I was thrilled and several more missed fish kept my enthusiasm going. Somehow, I’d experienced a one-two-three sucker punch in reverse. Could the old thick-lipped piscatorial character have brought me luck?


God often touches our lives in ways we don’t understand. A troubling experience points the way to renewal. A difficult time sends us a friend who needs our wisdom. He is in control though the path we’re traveling seems unbearable at that moment. I often want my difficulties to be removed rather than to learn the insight of the lesson. God is waiting to teach me the difference.


Before the day’s end, my friend Scott Branyan (a.k.a. The Fly Flinger) rowed his drift boat by with 2 fishers and we exchanged hellos across the river. Life could be no better than this: an enchanting day on the water, an incident to give me patience, several strong fish to stretch my line and greeting an old friend. Blessed beyond measure, I finished the day, took one more look around and made my way back home.
Posted by WriterGal at 10:15 AM No comments: 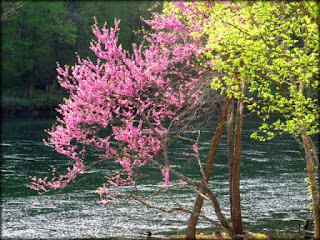