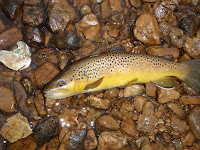 Luke 2: 12 And this shall be a sign unto you;Ye shall find the babe wrapped in swaddling clothes, lying in a manger.
The Monday after Thanksgiving I rushed to do my chores and catch up after spending the holidays with family. After a two-week hiatus, the dam was shut down and I was anxious to fish. Just as I finished my work, however, the rain began. For about ten minutes, it poured buckets and gobs; but finally stopped in time for me to gear up, grab my old rain jacket and mount my trusty four-wheeler.
Several weeks before, I had changed to a different access point, as the steps on my neighbor’s property had fallen into the gully. Another gracious summer-home owner had cleared off a spot next to the river and encouraged me to enter there. Much steeper than my other spot, it required some caution descending until I could reach a small knoll and approach the water.
On this rainy day, I inched my way down, careful to watch my feet and use my wading staff as a mud-detector. Just as I passed the knoll, however, my left boot took a mighty slide and I flopped on my back side. Pausing to catch my breath, I found no wounds except a tiny bit of ruptured pride; then consoled myself with the idea that I could wash off my muddy backside by wading out a bit further than I normally do.
The second gully I needed to cross was swifter than I had hoped. Not feeling confident at this point, I nevertheless tried twice but had to turn back on the second try as my cell phone rang. I couldn’t maneuver and answer before the caller disconnected.
I eyeballed the ditch, chose a different point and made it across. Two weeks before, I had caught twenty-five fish per day during three days of fishing soft hackles fifteen yards below the end of the gravel bar. Today the same spot with the same flies produced nothing.
I trudged upriver to my favorite riffle. A thin mist kissed the river. Silence comforted me with no boat motors or chain saws to interrupt my enjoyment. My cast flew smooth and true with no wind gusts to tangle my line. My favorite Sims waterproof hat with the chin flaps kept me dry. Droplets waltzed quietly from the brim.
I changed from my Orange and Partridge to a larger soft hackle similar to a Green Butt. Casting below the rock piles, I allowed it to drift before beginning to strip the line. In a split second a large fish struck on the fly’s upward move; and in my excitement I missed the take. I tried all the other runs with no results.
The day was too perfect to quit, so I walked further upriver almost to the end of the gravel bar where the ’08 floods had gouged a deeper cut. Changing flies again, I chose another soft hackle I had never used, a yellow color not quite the same as an Anna K.
Remembering my earlier mistake, I cast and waited until the fly began to ascend again. A fish struck and missed. I didn’t move but corralled my beating heart and waited. The second time he didn’t miss and neither did I. When I lifted the rod, he took off for deeper water. Since I stood on the precipice of the run, I carefully cranked with the proper rod tension and waded toward shallower water.
I glimpsed golden color when the fish heaved and twisted and knew I had a Brown. When I captured him in my net, I reveled in his perfect color and his attempts to throw the hook. Only about 15”, nevertheless he had put up a worthy battle. I quickly laid him down, snapped a picture and released him.
Within seconds, I threw into the same spot and reaped the reward of another Brown whose courage surpassed the first. Believing he was larger, I exercised even more caution until I’d duplicated my earlier efforts and scooped him into the net. Pausing, I again admired his vibrant colors, reversed the net and freed him.
I decided to quit for the day. Upon beginning my ascent up the hill, I reminded myself of my earlier debacle. I had almost reached the crest and safety when both boots slipped at the same time throwing me down on one arm and elbow. I wheezed out a strangled cry; and for a moment thought I’d fall to the bottom. Somehow I made it to my knees and finished the climb in that position; then stood to assess the state of my equipment. Mud smeared both sleeves of the blue rain jacket as well as my gloves. Sticks and copper-colored pine needles coated my waders and grit covered my reel.
As I staggered back to my four-wheeler, I focused on the day’s events through the perspective of a Christmas journey. As we prepare our hearts for the coming season, are we stymied by a non-producing spirit of despair? Do we stumble through the rocks and gullies losing sight of the stable we seek? Do we miss the vibrant colors and breath-taking sight of that starry night so long ago? Are we afraid to wade the muck to the stable and look in the tiny infant’s eyes? One courageous step up the path is all it takes.
He is waiting.
Posted by WriterGal at 2:57 PM No comments: 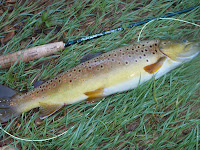 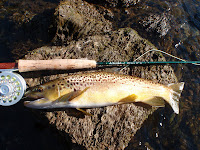 Psalms 18:2
The Lord is my rock, and my fortress, and my deliverer; my God, my strength, in whom I will trust; my buckler, and the horn of my salvation, and my high tower.
Ask any fly fisher about her fishing outing and she’ll usually tell you two things: where she fished and what fly she used. For instance you might hear someone say she caught them at Roundhouse Shoals on the far side of the island with a zebra midge. In mid-August, the water was shut off but hadn’t dropped out in our part of the river. So I decided to fish my other favorite spot, The Narrows
Low water had been a scarce commodity this summer and I was anxious to go. When I arrived at my preferred rock pile, I located two square rocks. In between these unusually shaped landmarks, there is a tiny waterfall that pitches into a deep drop-off. I love sailing my line out into swift water and watching it travel back into this select spot. I attached my favorite Partridge and Orange and began to fish. At first, takes were slow. I landed two below-average stockers.
After about thirty minutes, however, I received a stout tug on my line and a remarkable Brown surged out into deeper water. After a short tussle I captured him in my net. I was anxious to try out my brand new camera, an Olympus Tough 8000. Luckily I had it strung around my neck. I hurriedly took two shots of the fish in the net; then quickly positioned Mr. Brown on one of the square rocks, where I laid my rod next to him. He cooperated for a few seconds and I scooped him back into the net and released him. I continued to fish the somewhat bedraggled Partridge and Orange for a few more minutes without a single take. When I reeled in to check the fly, however, I saw why. It was gone! What a relief that the fly had come off after and not before.
I decided to switch to a green Caddis sparkler. Within a few minutes a larger Brown tail-danced for me; and, like its brother, broke ranks for swifter water. My 4 wt. Albright rod and Galvin reel were a match for his prowess, however; and my sharply bent rod made my pulse thrum faster. I kept the pole at the proper angle, didn’t rush, kept focus on the fish and eventually detained him. His large hooked jaw and gold splotched body made a striking image, one I needed to capture before he stressed and died. I rushed to a nearby grassy knoll on shore, laid him next to my rod where for several heart-stopping seconds, he refused to oblige. Finally, with the picture done, I splashed back into the water to release him into a shallow spot. Too late I realized there wasn’t enough water to get him revived. I’m sure the sight of this stooped woman herding a fish into the depths with her net provided many stories for the other fly fishers that evening. Finally, the tired fish rested in a deeper place, turned over once, causing my blood pressure to rise; then righted himself and plunged back into deep water.
This time I had the presence of mind to check my fly. As I felt down the hook, the point came off in my hand! Another near miss on a big fish. My brain turned to oatmeal as I contemplated the possible loss of this great creature.
Having no more of the same flies in my box, I decided to try a grasshopper. The week before I’d read in John Berry’s column as well as Jimmy Traylor’s blog about tying a midge to the bend of the hook below a grasshopper. I’d struggled to accomplish this task and had yet to reap any results. With my morning’s success spurring me on, however, I tied on the rig and held my breath, knowing how easy it was to wrap the entire mess around my rod tip if I didn’t exercise care with my backcast. The “hopper-dropper” settled back into calm water and lingered there a few seconds. Suddenly the yellow grasshopper lurched sideways. Was this it? Did it function like a strike indicator? Sure enough I lifted the rod to find a feisty Rainbow on the other end. A few seconds later, I caught another with the same set-up.
I checked my watch and knew the predicted generation was close at hand and decided to call it a day. As I slogged to my car, I realized all the lessons I’d learned today: always check my fly after catching a big fish, keep more than one type of successful fly in my box, and listen to my fishing mentors.
Spiritual tutorials abound in today’s fishing event. Since the Lord is the corner stone of my salvation, do I cite him enough throughout my daily existence? Each moment in my spiritual life needs a reality check to assure that my feet are on the right path. One method isn’t necessarily the only way to reach those around me and I must listen to my faith advisors. When all these elements are combined with a strong blend of prayer and scripture, then and only then have I built my life on The Rock and not the rock pile.

Posted by WriterGal at 2:54 PM No comments: